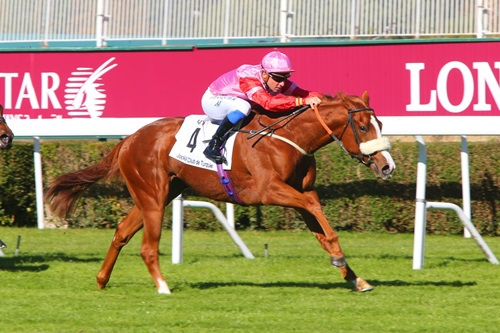 East is a beast!

Kevin Ryan’s record of producing Group winning two-year-olds is quite remarkable with seemingly a year never going by in the last 15 when the master of Hambleton Lodge hasn’t nailed a big prize with a two-year-old.

With the Gimcrack already in the bag courtesy of Emaraaty Ana, 2018 was already going to go down as a year of further great achievement for Kevin but things got better still in France on Friday.

Heading into this year’s Group 3 Prix Thomas Byron, East had ran just once, when winning a novice race easily at Hamilton under Kevin Stott.

The daughter of Frankel looked a natural up in grade however, overcoming slight interference and a less-than-ideal trip to win in great style under Stephane Pasquier.

East’s rider never needed to resort to the whip on the way to her impressive two-and-a-half length success, an effort which earned her a Racing Post Rating of 110.

Given her illustrious sire and the fact East clearly won with something in hand there looks a great chance this classy filly will rate higher again going forward.

East could now have a trip to America on her agenda for the Grade 1 Breeders’ Cup Juvenile Fillies Turf at Churchill Downs in early November.

Looking further ahead the unbeaten filly has shown sort of the ability that suggests she could be a major factor in the 1000 Guineas at Newmarket next year.

Whatever the future holds, East certainly looks a very exciting filly to look forward to.