It was great to enjoy another impressive winner for our owners today as Atomic Force proved way too powerful for his rivals in the two-year-old maiden at Hamilton.

A typically well bought yearling by Kevin and his bloodstock team at £22,000, Atomic Force looks a quality horse for his horse racing syndicate to enjoy after routing his rivals at Hamilton.

Breaking well from the stalls, Kevin Stott soon had the son of Cotai Glory at the head of affairs and they dominated thereafter, travelling all over their rivals throughout before asserting in great style in the final quarter mile.

Such was his dominance Kevin Stott was able to ease his mount down in the closing stages as the pair recorded a two-and-three-quarter length success.

With entries in the Weatherbys Super Sprint, Ballyhane Stakes and Redcar Two-Year-Old Trophy, Atomic Force certainly has plenty of nice, valuable options to consider for the rest of the year and looks sure to give his horse racing syndicate plenty of fun going forward.

For now his owners can enjoy the fact that Atomic Force was way too powerful for his rivals at Hamilton today.

He looks a horse to keep firmly on the right side of going forward. 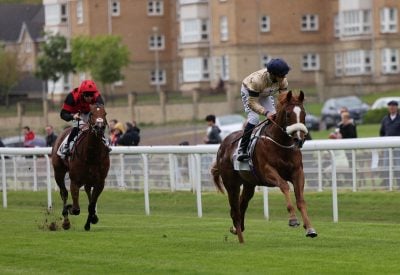