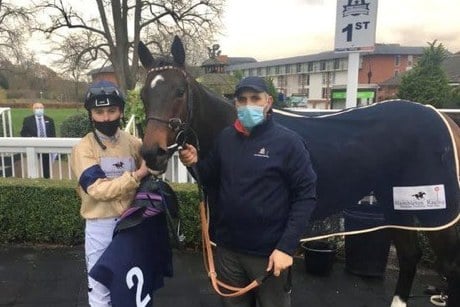 It was another great result for Highland Dress at Lingfield today as the improving four-year-old won the feature race decisively.

Stepped up to seven furlongs and always prominent, Highland Dress could be called as going well from an early stage and put his seal on the race decisively when asked to go and win by Kieran Shoemark.

A half-brother to the high-class Make A Challenge, the son of Shamardal is developing into a quality horse himself now for his horse racing syndicate.

Archie Watson, who has secured Group 1 glory for our owners already this year via Glen Shiel, certainly looks like he’s found owners another quality sort in Highland Dress, and feels he has better days ahead of him next year too.

It’s tremendously exciting to be involved with another smart horse at Saxon Gate with Archie.

Highland's win in Lingfield’s feature race was hardly coming out of turn either, after being beaten less than three lengths over six furlongs in two Listed races at Doncaster and Lingfield on the previous two Saturdays.

Three quality efforts in a row in three weeks on very different ground surfaces mark Highland down as a very tough, versatile horse with lots of quality.

His horse racing syndicate clearly have plenty to look forward to! For anyone wishing to join in the fun we have one twelfth share available in this exciting horse.