Our latest Hambleton event in Upper Lambourn certainly went down a treat as owners arrived at Archie Watson’s impressive facilities near Saxon Gate to name their colt.

A warm summer morning ensured owners could thoroughly enjoy watching the goings on around the yard and take in the beautiful surroundings, set in the infamous Lambourn Downs.

Whilst owners gathered in the yard, they were treated to a whole host of refreshments and baked treats as supplied by Tony at Bamboo Coffee.

As refreshing lemonades were sipped and homemade cakes devoured, everyone prepared to leave the yard to watch their soon-to-be-named colt exercising on the nearby Lambourn gallops, under his regular work rider.

This strong son of Mayson, pictured above, was not at all phased by his extra audience, impressing onlookers with his easy action as he cantered past, fifth in the group of youngsters from Archie’s ever-expanding string.

As he walked back down the gallop to return to the yard, there was plenty of chance for his owners to see him at close quarters and he received plenty of admiring glances as they were impressed by his ever-developing physique and laid-back attitude.

Archie certainly had the attention of everyone as he discussed in thorough detail his thoughts and plans for this exciting breeze-up recruit, as the horses quietly headed back to the stables.

Upon the colt’s return to the yard, he headed off to be washed down and groomed prior to those all-important complimentary naming day pictures.

After lapping up the attention and posing for pictures, he returned to his stable to enjoy his well-deserved lunch whilst the syndicate was treated to a fantastic stable tour of the two-year-old barn by Archie’s right-hand man, assistant trainer Chris. His exceptional knowledge of the horses there will hopefully have given everyone some names for the notebook for the second half of the turf season.

Once the stable tour was complete, everyone headed off to the award-winning pub the Queens Arms in nearby village East Garston, for drinks and a delicious two-course lunch ahead of the naming announcement.

The fantastic lunch was well-received by all and shortly after Hambleton’s head racing manager Cosmo took centre stage to announce the name, Maystar as the winner of the naming vote.

Owners toasted Maystar with champagne and it was seemingly a popular choice for all involved, such was the wide margin win. Lofty, who selected the winning name, was understandably pleased to be successful and took home a bottle of finest champagne to toast his own success.

With Maystar being so relaxed to be around and plenty of good conversation and laughter throughout the day, Wednesday’s all-complimentary naming event proved a most enjoyable day for all concerned.

As Maystar is taking his training so well at present, Archie hinted that it may only be a matter of weeks before he is ready to make his racecourse debut. Hopefully, his owners won’t have too much longer to wait before the real fun begins! 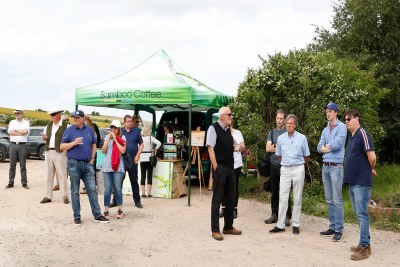 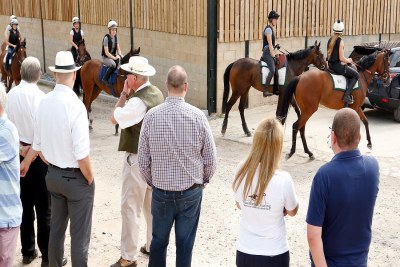 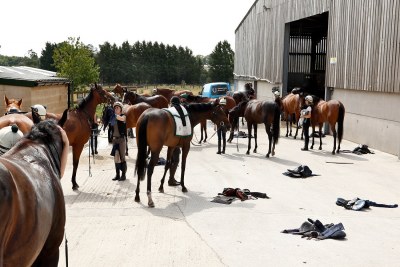