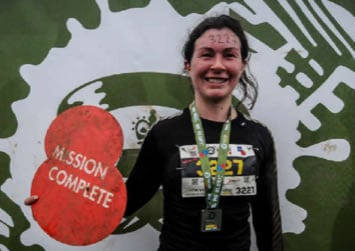 Kirsty Ready To Tough It Out!

There is a Hambleton runner on Saturday of a quite different nature as Kirsty Naylor, a key cog of the team at Kevin Ryan’s, is set to take part in the Obstacle Course Race World Championships for 2018.

Kirsty ever-welcoming smile and good nature has been a consistent theme for as long as we can remember at the stables and we’re delighted to be sponsoring her as she partakes in this fantastic event, which will see competitors from over 50 different countries battle it out to become World Champion!

Due to be held at Kelvedon Hatch in Brentwood, Essex, Kirsty will have to race over a tough 15K course in which she will encounter various obstacles along the way, going under nets, crossing water and undoubtedly getting covered in endless mud, which only adds to the exertions of completing this difficult course.

Kirsty herself has been a key member of the team at Hambleton Lodge for over ten years now, having previously enjoyed stints with fellow northern trainers Ferdy Murphy and Geoff Harker, since taking up a career in racing at the age of 18. A short spell at Highclere Stud breaking in the yearlings, prior to her arrival at Kevin’s, will certainly have tested her resolve as she prepares for what will be a tough task on Saturday.

Whilst working for Kevin, she has had her favourites along the way, of which current Hambleton horse Hurricane Speed is top of the list. Kirsty claims that his character reminds her much of her own, in that they both may be on the small side but they always endeavour to try their best!

Despite a ceremonious depositing of Kirsty in the indoor school earlier this season, as he returned to work following a gelding procedure, Hurricane Speed remains a firm favourite. Clearly, she is made of stronger stuff!

Kirsty’s interest in running began in 2014 when taking part in Total Warrior, with no prior training and little knowledge of what to expect, she flew around the course to finish a most respectable 62nd from well over 1000 competitors and instantly caught the bug. Not bad going for someone with no preparation to speak of.

Fast forward four years and plenty of races later, unbeknown to Kirsty she found herself in a World Championship qualifier, when competing in Total Warrior at Bramham Park in June. Here a fantastic third place in the lady’s section saw her gain automatic qualification for the upcoming finals.

Kirsty has since enlisted the help of John Withinshaw, an experienced runner in these types of races, and she has been training with him since the middle of July. In recent weeks she has managed to knock off an impressive one and a half minutes off her personal best for 10K, so the training is certainly paying dividends.

Her final prep race in the Lake District saw her compete in a tough ten-mile race, in which she finished a creditable sixth place and now all roads lead to Essex for the finals.

Kirsty is fairly modest about her own chances on Saturday and rates it much like asking a horse rated 70 to be competitive in a Group race, but we are certain she will surpass her expectations once again.

We’d like to take this opportunity to wish Kirsty all the best for Saturday. It will be a special moment as she pulls on the Great Britain vest for the first time in competition.

Highlights of the race are due to be shown on Channel 4 the following Saturday, when we will be keeping an eagle eye out for our unique Hambleton runner!